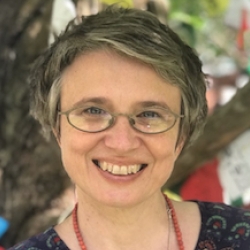 Jennifer Daubenmier, PhD, is an Associate Professor in the Holistic Health Studies Program. She received her doctorate in Social Psychology at University of California, Berkeley in 2002 with an interest in Buddhist Psychology and was Assistant Professor at the Osher Center for Integrative Medicine at the University of California, San Francisco, for 9 years until 2016. She conducts clinical trial research on the impact of Eastern mind-body healing practices, including meditation and yoga, on psychological well-being and health outcomes among individuals with stress-related health conditions, such as obesity, Type 2 diabetes, heart disease and prostate cancer. She has published 45 research articles in high-impact journals, including Lancent Oncology, Psychosomatic Medicine, Health Psychology, Psychoneuroendocrinology, and Obesity. Her research has also been featured in public media, including an Emmy-nominated HBO Documentary Film Series on obesity, “The Weight of the Nation,” NBC Nightly News, TIME, Consumer Reports, and U.S. News and World Report, along with numerous other news outlets and magazines.  In 2015, she was awarded a U.S. Fulbright Senior Research Scholar Award to study Tibetan medical and Buddhist perspectives of the mind-body relationship in Dharamsala, India, where she began to study Tibetan medicine. More recently, she has become interested in applying a social justice lens to the study of contemplative practices in order to address health inequities and enhance commitment to social justice movements. She currently teaches courses on meditation and mind-body healing methods from traditional Asian medical perspectives at SF State.